Jobs of the Future

There is a lot of speculation at the moment as to the jobs of the future. On the one hand, it is said that we are educating young people for jobs which do not yet exist; on the other hand there are dire predictions that up to of existing 55 per cent of jobs may disappear to automation in the next five years.

If it is hard as a researcher who works with labour market data to make sense of all this, imagine what it is like for young people trying to plan a career (and if doing a degree in the UK, running up major debt).

However, there is beginning to appear some more nuanced research on the future of jobs. Michael Chui, James Manyika, and Mehdi Miremadi have just published the initial report on a research project looking at how automation will affect future employment. The report, entitled 'Where machines could replace humans—and where they can’t (yet)’, is based on detailed analysis of 2,000-plus work activities for more than 800 occupations. Using data from the US Bureau of Labor Statistics and O*Net, they have quantified both the amount of time spent on these activities across the economy of the United States and the technical feasibility of automating each of them.

Their overall finding is that while automation will eliminate very few occupations entirely in the next decade, it will affect portions of almost all jobs to a greater or lesser degree, depending on the type of work they entail. 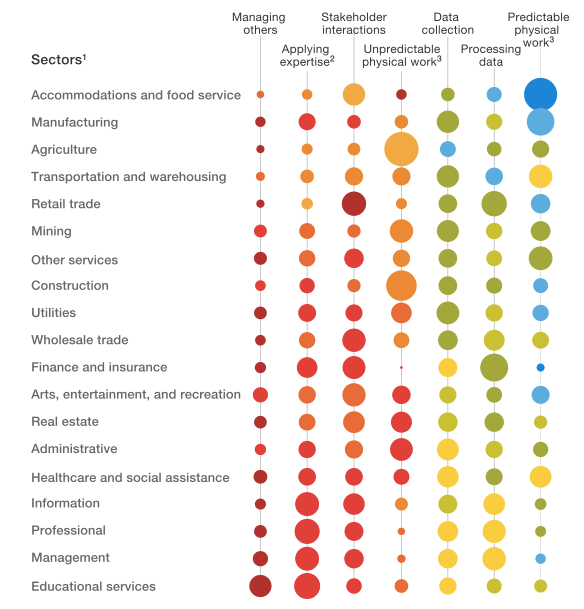 Each whole occupation is made up of multiple types of activities, each with varying degrees of technical feasibility. In practice, they explain, automation will depend on more than just technical feasibility. Five factors are involved: technical feasibility, costs to automate, the relative scarcity, skills and costs of workers who might otherwise do the activity, benefits (e.g. superior performance) of automation beyond labour costs substitution and regulatory and social acceptance considerations.
The likelihood and ease of automation depends on the types of activities organised on a continuum of less susceptible to automation to more susceptible to automation: managing others, applying expertise,  stakeholder interactions, unpredictable physical work, data collection, processing data, predictable physical work. Thus occupations like accommodation, food service and manufacturing which include a large amount of predictable physical work are likely to be automated, similarly work in finance and insurance which involves much processing of data. On the other hand jobs in construction and in agriculture which comprise predominantly unpredictable physical work are unlikely to be automated, at least at present. And there is good news for teachers: "the importance of human interaction is evident in two sectors that, so far, have a relatively low technical potential for automation: healthcare and education."

The woes of Brexit