In my latest blog I made the point that nowadays - due to the corona-crisis - the education and training providers have to start delivering their teaching and training online. This is no longer something as add-on to the 'ordinary' teaching and training. And as I mentioned, this challenge is being taken in rapid tempo - and it seems to push the developers to new innovations. Since I have been recently travelling, I have not been able to follow all relevant developments. Therefore, I need to catch up with my colleagues who are better informed. However, already at this point I can refer to inspiring news on the use of the Learning Toolbox (LTB) as support for vocational learning - also during the period of lockdown.

As regular readers of this blog surely know, the Learning Toolbox (LTB) was developed in the context of our EU-funded project Learning Layers (2013 - 2017). After a lengthy co-design process the project partners managed to develop and pilot test a digital toolset to support vocational and workplace-based learning. In our major pilot context, the North-German training centre Bau-ABC Rostrup, the full-time trainers have continued to use the toolset and spread it across all construction trades (for which they give training). As we have seen it during the project and afterwards, the LTB has proven to be user-friendly - both from the perspective of trainers and apprentices. Moreover, it has served the purpose to support self-organised learning and professional growth in the respective trades.

Use of Learning Toolbox (LTB) during the period of lockdown

So far our observations on the use of LTB have been based on working visits to Bau-ABC during the normal training periods when the full-time trainers have supervised the apprentices' projects. Now, during the crisis, the training centre has been closed and the training periods have been postponed. However, the trainers have not capitulated. Instead, they have prepared special LTB-stacks for the closure period and announced them via Facebook. Below, some screenshots will give an impression, how vocational learning contents have been shared with apprentices.

Screenshots 1a and 1b: The general announcement on the LTB-stacks for different trades 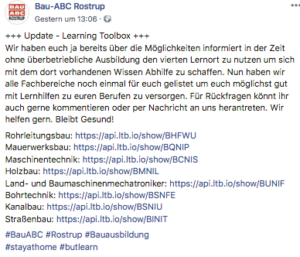 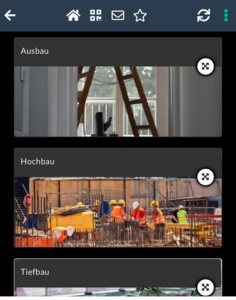 Screenshots 2a and 2b: Trade-specific LTB-stacks with attached introductory messages 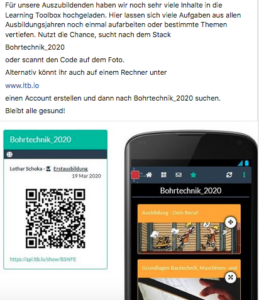 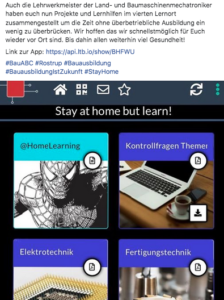 At this point I will not go into details, in what ways the trainers expect that these stacks will be used - after all, no one knows, when and how the return to some kind of new normality can take place. Nevertheless, the Bau-ABC trainers have shown that the LTB has proven to be a valuable toolset in supporting the training and learning processes during the crisis. I will try to catch up with the LTB-developers, the Bau-ABC trainers and other experts to learn more during the coming weeks.

Updates on the corona crisis - What ...

Come along to our Spring Discovery Day on Saturday 12th February!

Learn more about our educational offers, including our Level 2 NVQ’s in:
- Regenerative Horticulture 🌷
- Coppicing and Greenwood Trades 🌳