What's the problem with competency based education? 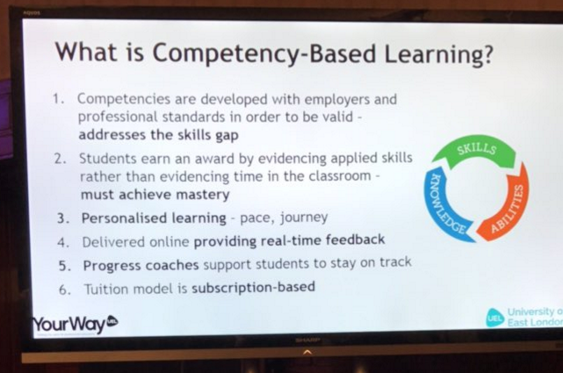 I got this diagram from a report by Katherine Hockey on the Accelerating Digital Transformation in Higher Education conference, I’ll write more about some of the topics Katherine raises, but for the moment just want to focus on Competency Based Learning.

Katherine says “Higher education learning may be open to change regarding teaching methods. Competency-based learning is being implemented at UEL, whereby the structure of a course is not linear in the traditional sense: the learner chooses modules at an order and pace that suits them. This aims at increasing employability, and was met initially with reservations but soon became popular with academics.”

Lets take the first sentence first. It seems to me that there is no doubt that Higher Education in general is open to new teaching methods. There may have been in the past resistance to using technology in education – partly based on a lack f competence and confidence in using technology as part of teaching and learning – but there have always been islands of exciting experimentation and innovation. The question has been how to move out from the islands.

Firstly is the myth that employers always know best. Just why a qualification developed with employers should be valid, and one developed without employers not is beyond me. The problem with employers is that they tend to look to the present or the short term future in defining skills requirements. Nd there is a difference between the skills that individual employers may require – or even groups of employers – and the wider knowledge and skills required to be flexible and forward looking in employment today. But even then would this be con

Another problem that beset NVQs was the relationship between ‘competence’ and knowledge and how to define performance to meet such competence. The NVQ system evolved, starting out with bald functional competence statements (yes, developed with employers), but later including ‘performance’ criteria and ‘underpinning knowledge.’ But even then was achievement of these standards considered as ‘mastery’? Some argued that it would be necessary to define the context in which the skills should be evidenced, others that there should be frequent (although how many and how often was never agreed) demonstrations of performance. And then of course there was the question of who is qualified to recognise the University of East London student’s mastery? How is there competence to act as assessors to be defined and assessed?

One of the big arguments for National Vocational Qualifications was the need to move away from time serving and have personalised and flexible routes whereby individuals could choose what they wanted to learn. In fact, some at NCVQ went further arguing that learning as an activity should be separated from qualifications. Once more few went down this route. Courses continued to be the way to qualifications, although there were a number of (quite expensive) experiments with recognising prior competences.

I would be deeply suspicious of just what they mean by “tuition model is subscription based”? This seems like just another attempt to package up education for sale in nice chunks: a step forward in the privatisation of education. But if past experiences of competency evangelism are anything to go by, this one will fail.

More about competency based education